In part 1 we learned that predicting possible futures requires a lot of research, hard work and imagination. In part 2 we explored two foresight techniques successfully used by major companies like Shell Oil to predict and react to potentially damaging futures.

Now, in part 3, we’ll explore my personal favourite technique. It’s my favourite because it possesses the ability to encompass so many divergent thoughts in such a single diagram. It achieves that most difficult of tasks, making the complex simple! It’s also known as the “futures cone”, but for my money Joseph Voros has developed the best version I’ve seen.

His version is known as the Voroscope and I’d be doing an injustice trying to paraphrase Voros so I’ll take the liberty of quoting directly from his site! 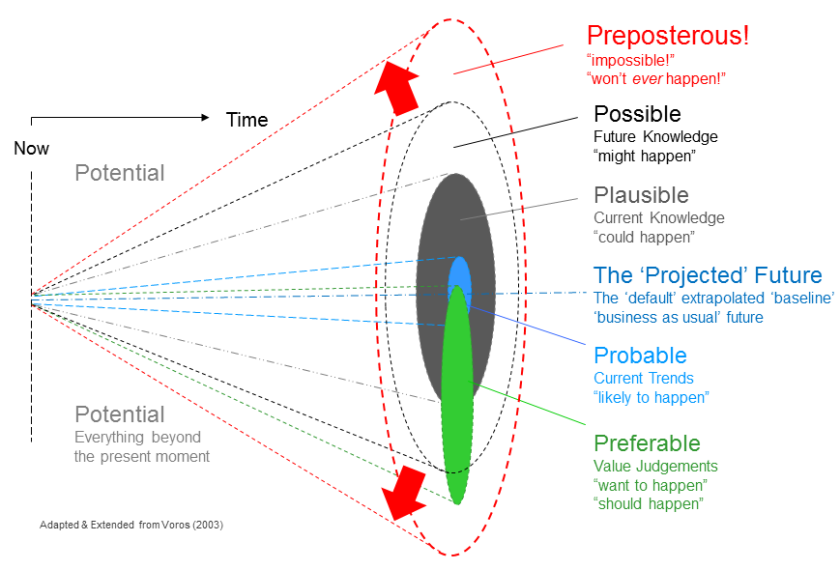 “The 7 types of alternative futures defined below (or 8 if one also includes a specific singular ‘predicted’ future, which I generally don’t do any more) are all considered to be subjective judgements about ideas about the future that are based in the present moment, so the categories for the same idea can obviously change over time as time goes on (the canonical example of which is the Apollo XI Moon landing, which has gone through most of the categories from ‘preposterous’ to ‘projected’ and thence into history as ‘the past’). In brief, these categories are:

·        Potential – everything beyond the present moment is a potential future. This comes from the assumption that the future is undetermined and ‘open’ not inevitable or ‘fixed’, which is perhaps the foundational axiom of Futures Studies.

·        Preposterous – these are the futures we judge to be ‘ridiculous’, ‘impossible’, or that will ‘never’ happen. I introduced this category because the next category (which used to be the edge of the original form of the cone) did not seem big enough, or able to capture the sometimes-vehement refusal to even entertain them that some people would exhibit to some ideas about the future.…

·        Possible – these are those futures that we think ‘might’ happen, based on some future knowledge we do not yet possess, but which we might possess someday (e.g., warp drive).

·        Plausible – those we think ‘could’ happen based on our current understanding of how the world works (physical laws, social processes, etc).

·        Probable – those we think are ‘likely to’ happen, usually based on (in many cases, quantitative) current trends.

·        Preferable – those we think ‘should’ or ‘ought to’ happen: normative value judgements as opposed to the mostly cognitive, above. There is also of course the associated converse class—the un-preferred futures—a ‘shadow’ form of anti-normative futures that we think should not happen nor ever be allowed to happen (e.g., global climate change scenarios comes to mind).

·        Projected – the (singular) default, business as usual, ‘baseline’, extrapolated ‘continuation of the past through the present’ future. This single future could also be considered as being ‘the most probable’ of the Probable futures. And,

·        (Predicted) – the future that someone claims ‘will’ happen. I briefly toyed with using this category for a few years quite some time ago now, but I ended up not using it anymore because it tends to cloud the openness to possibilities (or, more usefully, the ‘preposter-abilities’!) that using the full Futures Cone is intended to engender.

Thus, every future is a potential future, including those we cannot even imagine—these latter are outside the cone, in the ‘dark’ area, as it were. The cone metaphor can be likened to a spotlight or car headlight: bright in the centre and diffusing to darkness at the edge—a nice visual metaphor of the extent of our futures ‘vision’, so to speak. There is a key lesson to the listener when using this metaphor—just because we cannot imagine a future does not mean it cannot happen…”

1.      It so elegantly shows us that the various futures only increase in number the further we progress into the future.

3.      It makes us consider every future from probable to preposterous.

Obviously only one future becomes our reality (and it may not even be one you considered!) so, whatever technique you use, constant checking of reality against the proposed future(s) is an absolute must. And look out for those Black Swans……….. but that’s for another time.

There are many other techniques available, but I just wanted to write an article, not a book! Finding the right technique for you and your organisation can be difficult, but futures work is the most fascinating area of business strategy today, especially in food. Not only because of the array of new technologies being applied to food, but its importance in feeding an ever growing population from now to 2050! It’s also highly lucrative for companies who practise foresight, as shown in the articles by Rohrbeck and his colleagues.

To summarise, there’s a somewhat cliched saying attributed to Alan Kay of Xerox PARC that “The best way to predict the future is to invent it”. Despite being cliched it’s very true, and it’s incumbent on us all to take responsibility for influencing our own and our company’s future. Finally, as Voros says above;