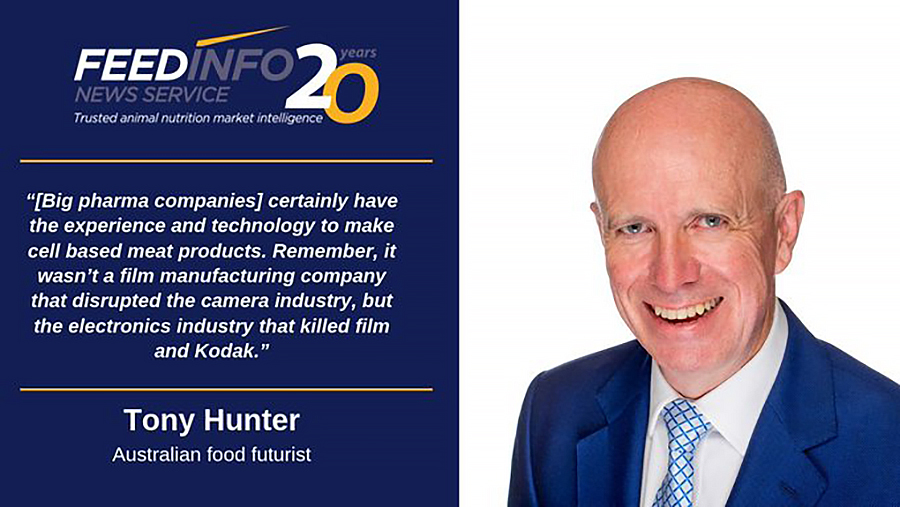 25 July 2019 – Animal nutrition companies should not view the new plant and cell based meat industries as “the enemy” but instead consider these growing segments as opportunities to expand their business.
If companies don’t change their minds they risk being unable to capitalise on the requirements of these new alternative meat technologies.

“Viewing your business as solely feeding animals is a zero sum game,” argues Australian food futurist Tony Hunter. “Besides, there’s not enough land or water for 10 billion people to eat in quantity as much as the populations of the US, UK and Australia. So beef and sheep meat in particular have a physical cap on how big they can grow.”

“Prepare for a potentially shrinking market and a race to the bottom on pricing in order to survive! Alternatively, if companies see themselves as selling to the protein manufacturing industry the opportunities are endless, whatever the future holds,” Hunter warns.

Hunter’s view is that end manufacturers (the consumer foods companies) are at the end of the day “protein source agnostic”. In other words, whatever source of protein sells they will supply it.

And by extension feed suppliers need to take the same approach.

Tracking the behaviour of the larger, forward-thinking meat companies can provide animal nutrition firms with some indications.

“The best clue to a possible future of conventional meat companies is Tyson Foods,” Hunter says.

“Tyson’s CEO Tom Haynes said ‘If we can grow meat without an animal, why wouldn’t we?’ Tyson has investments in mushroom protein producer MycoTechnology and cell based meat companies, Memphis Meats and Future Meat Technologies. Tyson will soon release a range of plant based and meat/plant blended products. And Tyson sold their investment in Beyond Meat, but did they try to buy Beyond Meat before its IPO? We may never know for sure, but my bet is yes, they sure did!”

“The establishment of cell based facilities will be enormously capital intensive and companies like Tyson, JBS and Hormel are well-positioned to afford the expenditure. So cell based start-ups could well become part of one of these companies,” Hunter adds.

Alternatively, Big Pharma could seize the opportunity from under the noses of the big conventional meat producers.

“They certainly have the experience and technology to make cell based meat products. Remember, it wasn’t a film manufacturing company that disrupted the camera industry, but the electronics industry that killed film and Kodak,” comments Hunter.

“As another option, how about a new company Merck-Tyson Foods or JBS-Pfizer? Samsung have gone from electronics to make biologics, why not Samsung Meats?”

The food futurist also believes that we must not underestimate another trend which has taken shape with some conventional animal agriculture companies leaving the industry.

He points to the examples of US company, Elmhurst Farms’ conversion from a dairy to a plant based milk company and Dutch meat company Vivera selling off its meat division.

The forward-thinking consumer food companies will increasingly be addressing and catering to the demand for personalised nutrition, which Hunter believes is a very big trend for the “Future of Food.”

“Human nutrition will be increasingly tailored to the individual,” he says.

“Take companies like Mixfit who provide ‘Real-time personalisation based on your diet and activity’. They use AI to take your personal medical, food, lifestyle and other factors into account to predict which nutrients you lack at a particular day. The Mixfit countertop appliance then produces a flavoured drink customised to your needs.”

“Many targeted supplements will be required and many animal health/nutrition companies are in a great position to supply a personalised human nutrition market,” Hunter adds.

“The one certainty is that the meat industry will look quite different in 2030 and even more so by 2050!”

Bite Sized Update! – Scaleup support is essential for Food and Ag startups to make an impact

The 2 things keeping Directors and C-Suite Execs up at night!

What is the Future of Food in the UAE?