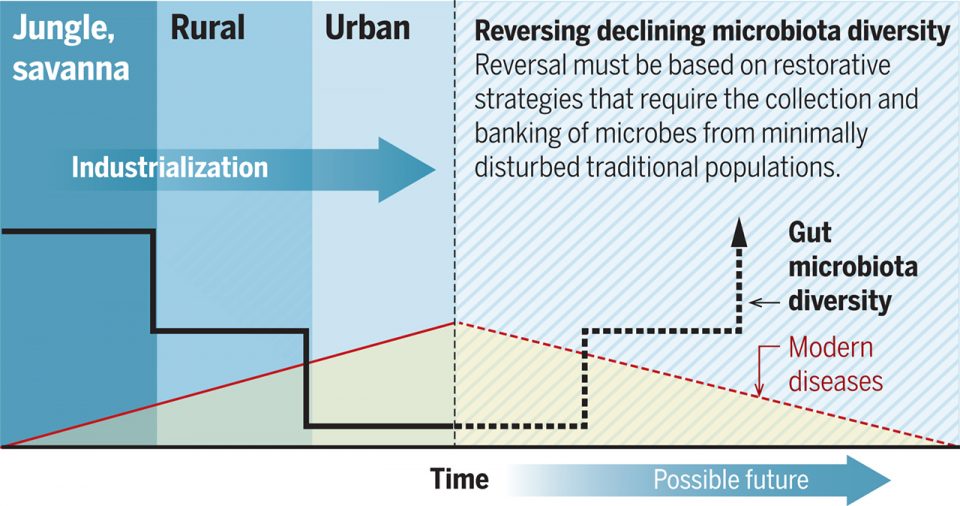 A microbial “Noah’s Ark” is being proposed to protect our microbiome diversity. This proposal is made in an article published recently in Science magazine.  Apparently “Western diets and lifestyles are quickly shrinking the diversity” of our microbiota. By collecting the microbiota of people not exposed to urbanisation “healthy” microbes can be sourced and preserved. For instance South American Amerindians have gut flora twice as diverse as the average American.

Indeed “Western diets and lifestyles are quickly shrinking the diversity of this microbiota, and these imbalances have been found to increase your risk of obesity, Alzheimer’s, diabetes and other autoimmune diseases”. According to the lead author Maria Gloria Dominguez-Bello  “These microbes co-evolved with humans over hundreds of millennia. They help us digest food, strengthen our immune system and protect against invading germs. Over a handful of generations, we have seen a staggering loss in microbial diversity linked with a worldwide spike in immune and other disorders.” This loss of diversity is apparently directly related to the rise of industrialisation. This industrialisation has lead to many benefits to mankind, including chlorinated water, antibiotics, antiseptics and cesarean birth. However the downside is only now being experienced in the rise of such modern diseases as obesity, asthma, food allergies and many others.

Our knowledge of relationship of the microbiome and microbiota to human health is in its infancy but there are definitely correlations. The Science article quotes that “For example, Oxalobacter formigenes uses indigestible oxalate and its loss (12) may be hindering protection against the formation of kidney stones, which are composed of calcium oxalate. This is just the beginning of our knowledge about the impacts of living in an industrialized world—we need to better understand which strains in human populations are diminishing and what the functional and pathological implications are for these losses.”

The authors of the Science article propose that we urgently need Biobanking. This would involve collecting microbes from “traditional peoples in developing countries”. That way we gather the widest range of potentially beneficial microbes. It has parallels in the Svalbard Global Seed Vault and may be just as important!  It certainly won’t be cheap to fund a project like this, but a drop in biological diversity doesn’t seem to be a good idea whatever the species!

Whether the preservation of diverse microbial species will actually lead to better health in our industrialised western societies remains to be seen.